On sunday the 24th of april we celebrated the Divine Mercy Feast in our ca­the­dral with the English spea­king community. It was organised by the Divine Mercy Apostolate Holland and the Filippino-English community of Laren, but there were faithful from all parts of the country. It was nice to celebrate this beautiful occasion again with so many people!

The presence of His Exc. the ambassador of the Philippines, J. Eduardo Malaya (photo below), the beautiful sin­ging of the choir, the many images of the Divine Mercy that were brought for the bles­sing, the many people that went for confession, a testimony given by Malou Pimen­tel at the end of the Mass, everything contributed to make it a special and festive occasion in honour of the Divine Mercy! Fr. Ruben Torres, Fr. Julius Elferink and Fr. Dennis svd concelebrated this Mass

Suffe­ring in the life of a young man

Eighty years ago, in October 1942,
a young man
knocked at the door
of the Archbishop’s resi­dence in Krakow, Poland,
and asked to study for the priesthood.
Soon he started in a clandestine
underground seminary, set up by the archbishop,
secretly, because of the German occupation.

He was an extraordinary person,
not only because he was brilliant and pious,
but at the age of twenty,
he had already lost
all his beloved ones:
his mother, his brother, his father,
they all had passed away.
In 1940 he had two major acci­dents
and he suffered from severe injuries.
Little more than a year after he entered the seminary,
he became involved in an other acci­dent,
he was hit by a German truck.
Another year later he had a narrow escape
from the German Gestapo
that tried to capture young men.

Maybe now it is already clear to you
that this young man
was Karol Woltyla,
the later pope saint John Paul II,
great apostle of the Divine mercy.

If we look at his early life
we may be tempted to ask:
where was Divine mercy?
Why had such a good young man
to suffer so much?
Why was that?
Of course we cannot give
a precise answer,
we know all the answers
will only be given in heaven,
when we’ll experience the presence of God
and participate in a new way in Divine life.

But already now
we have learned something
and have come to know a little
of the significance of certain events
in the life of the young Karol Woltyla.
For instance, it was surely Divine Provi­dence
that He as a seminarian, priest and bishop
came to know the life and visions of Sr. Faustina
and started to appreciate them,
He, who by Divine Provi­dence,
was meant to be a future pope
and was able to canonize sister Faustina as a Saint
and to introduce this Divine mercy Sunday
with the plenary indulgence
attached to it.

Suffe­rings did not finish
when he became the bishop of Rome.
Three times
there was an attempt on his life
while he was pope:
of course there was the attempt in Saint Peter’s square,
where the holy Father was seriously injured
by the bullets fired by Ali Agca
and later it was tried again in Fatima
and in the Philippines.
But the Pope’s motto
from the begin­ning of his pontificate, was:
“Totus tuus”, totally yours,
which he said to Our Lady, the mother of God;
and the other motto
that was among the first papal words,
he said in Saint Peter’s square:
“Be not afraid”.
Do not fear. Don’t let yourself be discouraged!

I think we all are convinced
that what happened to the young Karol Woltyla,
although it was hard and difficult sometimes,
was somehow fit­ting
in the great plan of Divine Provi­dence,
even these suffe­rings I mentioned already .
Why did God permit this?
Surely, it belonged somehow there,
it had a place
in Karol’s spiritual formation,
in his preparation as a future pope.
Maybe, it was because a pope has to suffer
a lot for the church,
he must be prepared for this suffe­ring,
maybe it was to make him able
to participate in the suffe­ring
of man­kind
and to be close to the poor;
maybe it was because of the redemptive value
of suffe­ring united with the Lord’s suffe­ring;
maybe, indeed, it was to help him
to understand his special mission
and to carry it out.

At the end, overseeing everything
from God’s perspective,
we will have to admit:
this preparation with suffe­ring and his papacy
were an extraordinary gift to the Church,
everything that happened to him
must have been a gift of Divine Mercy.

This is a message to all of us, as well:
try to see and discover
God’s mercy in what happens to you.

How he passed away

Saint John Paul II passed away
on the eve of Mercy Sunday.
His last words were:
“Allow me to depart to the house of the Father”
The vigil-Mass of Mercy-Sunday
had just been celebrated at his bedside
before he left this earth.
Millions and millions of faithful
attended his funeral
or came to pay their respect.

If we overlook the life
of saint John Paul II
it is clear that it was a sign of God’s mercy
and a work of His provi­dence.

Does He love me?

On this beautiful 2nd Sunday of Easter
we are invited to ask for Gods mercy
and to be merciful ourselves
and to comple­tely trust in Jesus.
Often we are tempted to doubt
about His presence and loving care for us.
If we feel down and sad
we are inclined to think:
the Lord has forgotten me,
He does not love me,
He is not there for me.
But if that happens to you,
I invite you to meditate
upon the life of saint John Paul II:
He had so many difficult periods in his life,
so many sad events and problems,
but he never gave up,
he continued to trust in Divine mercy
and that’s why he was able
to be such a great apostle of Gods merciful love.

God wants us to know
that all the graces of His mercy
can only be received by our trust.
The more we open the door
of our hearts and lives
to Him with trust,
the more we can receive.

Are you going through a difficult period?
Do you have to suffer
in one way or another?
Be patient and trust in God’s mercy.
The Lord did not leave you alone,
as you may think..
I do not know exactly
why this or that happens to you,
the only thing I know is:
God has a merciful plan for your life;
what happens is to prepare you
for the great work He wants to perform
through you,
with your cooperation.
Your suffe­ring
is not without mea­ning.

Let us - with Gods help - try to be full
of trust and confi­dence:
This world is not ours,
it is not in our hands,
we are invited to contribute
and make it a better place,
but it is not ours.
the Church is not ours,
the Church is of the Lord,
Our life is not ours,
it belongs to the Lord.
We have to work, surely,
we have to do what we can,
but at the end we have to be just confi­dent,
since every good outcome is grace.
So, be patient, have trust;
His Divine mercy never fails... 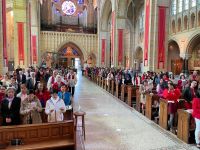 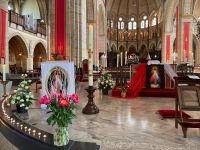