Have faith, be a mis­sio­na­ry in a secularized country!

A Christian of the Syro Malabar catholic Church or the Syro Malankara church will surely be honoured that his people and his community received the gospel as early as the first century through the mis­sio­na­ry activity of saint Thomas the apostle, while here in the Netherlands the gospel was preached only in the seventh century. And of course you will be grateful that the great gift that the gospel is, was transmitted in Kerala by one of the apostles, Saint Thomas, the apostel who declared his faith in simple and very clear words: “My Lord and my God”.

My Lord and my God

This confession of faith is repeated daily by millions of Christians. These words of saint Thomas: “My Lord and my God”, I learned as a child to repeat them each time as the body and blood of Our Lord became present after the consecration of bread and wine in the holy Eucha­rist. It is the profession of faith that saint Thomas exclaimed when he met for the first time the risen Lord, Jesus Christ and this profession of faith brings to expression the very heart of our faith: You, Jesus Christ, risen Lord, you are our Lord and God, because you freed us from sin, before you we have to bow down, you are my Lord, whatever you want me to do, whatever you want me to see, whatever you entrust to me as my vocation, I will do. I will follow you, since you are my Lord and my God.

Did he fail as an apostle?

Maybe sometimes, we are inclined to think that saint Thomas failed in his duties as an apostle because he was not there when Jesus, the risen Lord, after His resurrection entered the room where the apostles were gathered, with exception of Thomas. We may even feel that saint Thomas was not strong enough in faith when he was doub­ting and denying that Jesus really was risen and had appeared to his apostles.

This maybe true, but whatever you think about this approach of Thomas’ refusal to believe, we cannot deny that the faith of someone who converts himself to Jesus like Thomas did, is often stron­ger and deeper than the faith of someone who never questioned his faith and just took it for granted. If it happened to us that we were doubtful and not so convinced of the Christian faith we have received, but if then in a certain moment, in certain circumstances or through a new experience, the Lord touches our soul, it might well be that our faith is going to be stron­ger than before and new, and even stron­ger than the faith of many others who did not have such an experience of conversion.

So, be grateful if you are like saint Thomas! And please recall the saint Thomas-moments of your life. When were you able to touch the presence of the Lord? Where did the Lord touch your soul? How did your faith become more personal, not just knowledge transmitted to you, touching your mind but not your heart? When did faith become a treasure of your heart?

People of no faith

Besides, you are living here in the Netherlands in a secularized, non-belie­ving country. More than half of the population does not have a faith in a personal God, they do not think there is anything else but this world, no creator, nothing.

For me it is hard to believe that people really do not have faith. If you look at a beautiful pain­ting in a museum - let us say the Night watch by Rembrandt for instance -: how could you believe seeing this magnificent piece of art, that there is no one who created it or that this pain­ting came about only by coinci­dence?

The beauty of nature

We all notice a beautiful harmony in nature, when we contemplate creation, even when we just have a stroll and admire the beauties of nature, nevertheless, seeing these beauties of nature and the harmony of creation, many people in our days do not believe there is a creator, a maker of this all, they think it is just coinci­dence that it came about like this.

Many of them do not have time and silence to meditate upon what they see with their eyes and they want to be able to put their fin­gers on it before they will believe. Many people, especially today, are open and they want to know and learn, so let us hope and pray that the Lord will touch their hearts as He did by coming to saint Thomas. Saint Thomas may be inspirational to them!

Saint Thomas and the non-believers

For all the persons in todays western society who cannot believe, saint Thomas is a perfect saint, a helper and intercessor. Because he too, he wanted to control, to be able to touch the Lord before he would believe. So, let us be grateful for what Thomas said and did, because it helps us to be patient with our fellow man who do not believe and to try to help them to come to faith. Let us hope and pray that they will live a new experience in which they can encounter Jesus, the risen Lord!

Saint Thomas became a great mis­sio­na­ry, he spread the gospel in many places. His experience of not-belie­ving and coming to faith only afterwards will certainly have been of great value and an inspiration for his mis­sio­na­ry activities, when he was preaching the risen Christ. But you too, all of you, who have received the gospel and are living in a country where the presence of Christian faith is weak, you are called to be missionaries as well, by giving testimony to your faith, by hel­ping people to discover the beauty of the Christian faith and to meet with Jesus Christ.

The Indian community, the community of Thomas-Christians here in the Netherlands has increased in recent years, it has grown much big­ger than - let us say - even twenty years ago. Your belie­ving presence is enriching, your faith is a gift, a gift to this country and I hope it will be a help for many to discover Christian values and to meet the Lord.

Do you feel weak?

But maybe you feel it is not so easy to be an apostle of Christ today. Maybe you feel week, you can’t find the words, you do not know what to do, you are not so strong. In that case, it might be a consolation to know that even saint Thomas had his moments of difficulty and unbelief. It might be a consolation to know that the Lord has chosen apostles who were not so perfect, not so strong in their faith, not always so capable. Simon Peter was chosen as the vicar of Christ, the rock on which the Church was to be built, but we saw him terribly afraid during the storm on the lake of Galilee and when the Lord invited him to walk on the waters towards Him, he lost his courage while doing so and started to sink. And he betrayed his Master, because he was afraid. We know about Jude who betrayed the Lord, we know about saint Thomas, who first did not believe in the resurrection, we know about the other apostles, they sometimes felt discouraged, they wanted to quit, they were sometimes weak.

Of course this contains a message for us: don’t get discouraged, don’t think you won’t be able to. You are right, we are not able to perform the good work, but He is able to do everything, He can accomplish His work in us, what we have to do is to cooperate, giving grace its chances, be willing, be open, be generous, give.

Not our failures, not even our shortco­mings are pivotal, but our opennes to Him, our desire to begin anew, our desires to love and serve Him, to give our live for the mission the Lord has entrusted to us. We thank today Saint Thomas for making this clear to us, we honour his relic, present among us today. May we be filled with his faith, his courage, his mis­sio­na­ry spirit, because you, Jesus Christ, you are My Lord, you are my God! 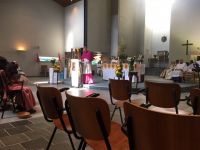